More than this that is not yet: Theses on Militant Romanticism

The piece was performed live via microphone from a separate room, leaving the audience alone with only words and each other. The event was part of the series Rhythms, Voices and Ties, curated by Federica Bueti and presented at Archiv Kabinett, Berlin

The only visual residue of this spoken word performance is the accompanying booklet, where the entire text is blacked out, and opens up to reveal a poster of the titles for all 10 theses. 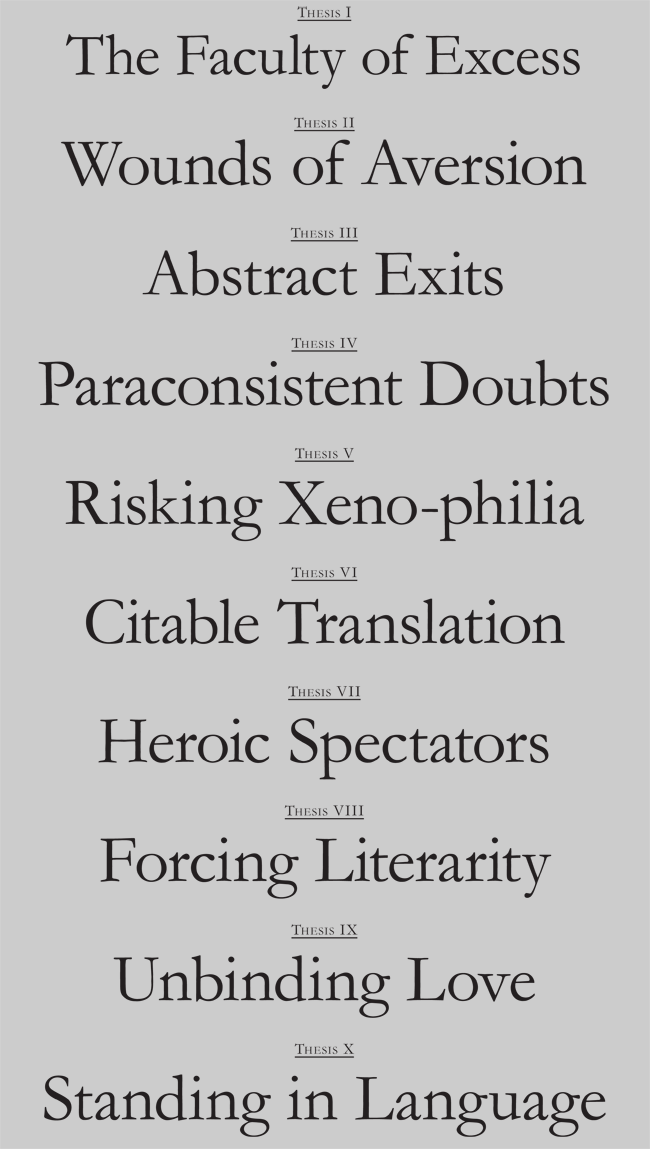 Thesis 1: The Faculty of Excess

Let me begin with imagination. Imagination is not the opposite of reality, but is the ability to make present that which is absent. It is Wordsworth’s glorious faculty, Baudelaire’s queen of all faculties; Rousseau’s ambiguous faculty, Coleridge’s plastic faculty, Mouffe’s pluralistic faculty; imagination is pure excess; it is cognitions’ extra-ornamental necessity. In an impassioned tango between the thalamus and neocortex, imagination is where materials are de-re-un-dis-mis-constructed by rules of the soul.1 The soul not only instructs but feasts on imagination, protruding the measure of the mundane.

Epochs now sunder these sentiments from us it is true, and much of the words ring with dated chimes. Yet, those ecclesiastical humanists who would condemn imagination (and the soul!) to the alcove of individualism without substantial consequence falsely sever imagination from its essential symbiosis with reproducible sociality and its potential rupturing. There is no creation without imagination, there is no building without imagination; it is not the opposite of reality; it is reality’s elusive scaffold and abstract prop. Imagination is not the creation of something from nothing, but the creation of an absent something. This will be a guiding axiom.