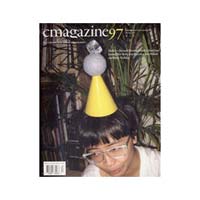 ÜBERleben, literally “Over Life”, takes us through a variety of video, installation and wall-based works located within a resurrected, gothic milieu. Four large caves for the presentation of video works were designed for the show by the architect, Nikolai Kaindl, in collaboration with curators, Sophie Hamacher and Louise Witthöft. These fractalesque architectural structures set up a self-conscious choreography of viewing, forcing the audience to manoeuvre around and through the protruding volumes. The dramatic architecture takes on a cathedral-like presence, with its pristine, icy-white exteriors setting the stage for a diverse selection of works eliciting feelings of stagnation, fear and anxiety.

The interstitial premise of the show’s title—being neither alive, nor dead, but something apart from life—is employed as a survival strategy in the face of an all-consuming societal emptiness. Be it through zombies, vampires, inactive characters, Paris Hilton’s blonde hair or a drunken dance, ÜBERleben maps out a territory where the ever-morphing thresholds between the “mainstream” and the “alternative” overlap in atonal, fluctuating harmony. As the sound from Elena Kovylina’s video/performance, Waltz (2001) seeps into the exhibition landscape, Marlene Dietrich’s low, dry voice can be heard, mirroring the ennui on view: “What can I do, I can’t help it?”—a veritable Zizekian formula for fetishism, where we all know better, but…

Nestled within the cavernous spaces of the architecture are four monitor based video works. Kovylina’s Waltz documents the artist as she dances with male spectators in a darkened Berlin courtyard to the songs of Marlene Dietrich, whilst polishing off a bottle of vodka, shot by shot. Between shots she pins a medal of honour on the breast of her military uniform, quickly takes a gulp of Coke and moves on to the next man. The audience passively gazes on as her intoxication grows to obscene levels and she can barely stand upright, all the while her partners assume awkward expressions of complicity within and for her spectacle. As she downs the last shot, smashing the glass to the ground, she pulls herself together, and abruptly marches out, surprisingly emancipated from her self-destructive performance.

Elke Marhöfer’s work, Erase You (2005/2007), steps away from the spectacle of Waltz, as the camera slowly pans over a collection of four listless figures in a dimly lit space. The exhausted bodies, sprawling on the floor not doing much, are caught somewhere between solipsistic melancholy and collective apathy. The slowness with which this non-event unfolds suggests withdrawal, a mood further enhanced by the viewer’s position of primitive retreat inside the cave in which it is presented.

Other modes of collectivity are questioned by Bernadette Corporation’s Be Corpse (2006). Displayed on two small, synchronized LCD monitors laid on the floor, scenes of hedonistic acts of carnival from Berlin’s Love Parade unfurl as a backdrop for a voiceover narration of a never to be filmed zombie screenplay. The commercial nature of this festival, which purports to resurrect and celebrate the public corpus, is critically reconsidered—not as a site of collaborative bacchanal, but as a macabre mise en scène for individuals driven by pure self-gratification.

From spectacular self-destructive indulgence, to apathetic withdrawal, to celebratory festival, this exhibition finds the myth of the zombie alive and well in contemporary rituals of self-zombification. Complicating the zombie myth are two works on display that employ the vernacular of Hollywood pop to subversive ends. Karl Holmqvist’s collage, Untitled (2006) features images of Tom Cruise and Brad Pitt from the film Interview with the Vampire, juxtaposed with paparazzi images of the stars. The pairing the iconic “real” with the “fictional” world of film exposes an inversion where the absurdity of our obsession with celebrities is more surreal than the films they appear in. Depicting a morbid, satirical twinning of Paris Hilton and Nicole Ritchie is Rebecca Kressley’s video, A Blonde Sun (2007). In a jerkily animated sequence, the blonde wigs of the famous BFFs fly up to the sun and are terrorized by a flock of Harpies—beautiful, hybrid woman-bird creatures that are said to have stolen food, brought life, and acted as death angels.

A piecing together of divergent contexts and figures feeds into the 13th-century Gothic motif that runs throughout the exhibition. Malte Lochstedt’s Requiem Killers (2007) epitomizes this approach; he creates a readymade remix by combining one half of a vinyl record each of Iron Maiden’s Killers and Mozart’s Requiem on a turntable, ready to play. A symphonic abutment of sounds and genres ensues as the turntable jump cuts from one groove to the next. Parallel to the turntable are the series of spliced scores from both pieces, torn and roughly put together, the incongruence of musical languages made palpable.

As a gesamtkunstwerk, ÜBERleben comments on the supposed de-politicization of a generation that has come of age in the last 20 years. By weaving festive event-based culture, iconic pop figures and strategies of withdrawal within a common tapestry, the exhibition takes a critical look at society’s normalization processes, and the modes by which they are celebrated, or lamented and resisted. ÜBERleben operates as a large-scale collage in itself, escaping the cliché of the Gothic whilst appropriating its cultural legacy. This opens a wide interpretive space for the audience. As an inherently irresolvable concept, ÜBERleben launches the viewer into a precarious state that forces us to face our fragile, albeit fetishistic selves no matter which side of the norm we see ourselves surviving on. As the Bernadette Corporation says in Be Corpse, “New energy can come from dead things.”