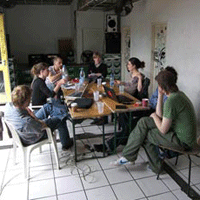 Contract of Discord was a collective project with more than 20 of the pre-supposed participants of Dept. III of the canceled Manifesta 6 biennale scheduled for Nicosia, Cyprus. The canceling of the biennale transformed it’s initial intentions, becoming the first purely textual biennale, comprised of legal documents, emails, press, applications, publications, etc.

From this perspective, the “still-born” network of Dept III participants, sought to reanimate itself into a “zombie network”, as a collective, resurrected, productive ‘ding’. The non-consensual, collaborative efforts are combined into a co-authored “confetti contract” – a text co-built in iterations between all participants of fragments, statements, digressions, interactions, re-writings, definitions and discords that take place amongst such a large group. Participants initially worked remotely and several convened in Berlin at WestGermany for final contract deliberations (May 28-31, 2007). The unsigned contract was celebrated publicly with an /Abschlussball/ (end of school year celebration) on June 1, 2007.

The contract of discord re-appropriates the textual medium of the Biennale and replaces our broken non-contract of pre-supposed participation in the event as ‘students’. Furthermore, the rules of engagement within the groups activity, are themselves, an experiment into disunity and dissension based forms of collaborative production – the only rule being that one could not delete the work of another, but rather violently strike it out.