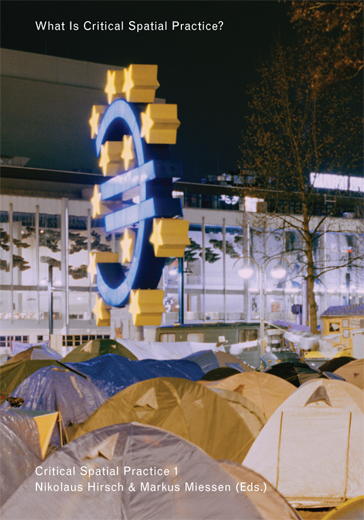 Critical spatial practices must first overcome the normalization of ‘being critical’. What is recognized as ‘appropriately critical’ is a notion of critique deployed from a position of superior knowledge leading to judgments of situations, revelatory of obscured ‘realities’ of a given subject of concern. Being ‘appropriately critical’ in aesthetic practices is reduced to the domain of the diagnostic, bounded by that which is, rather than what could be. While analyses of given spatio-social environments are wholly necessary as an aesthetic practitioner, critique cannot stop at what is, self-congratulatory in a position of privileged judgment. Critique, through the vital lens of Foucault and Judith Butler is not merely diagnostic but is a space of resistant creation (negation through affirmation), the ‘art’ of critique is equal to the creation of conditions for other life practices to emerge. Escaping the ubiquitously banal and self-satisfied nature of being ‘appropriately critical’, critique itself needs semantic and praxis-oriented renovation if it is to enact a capacity to articulate other affective conditions of/for spatiality, beyond those that already are. Being ‘inappropriately critical’ is not to reveal hidden truths behind the veil of appearances, but to affirmatively instantiate other modalities of appearance, ushering in potential truths through the process of appearing.

Appearing is not reducible to the sphere of the visible, but includes all that which can be perceived, that which generates affect. The vague, openness of ‘appearing’ is the potency of spatial practice, for it knows no predetermined figuration, taking on substantial as well as immaterial forms as viable modes of articulation. Built-forms, infrastructure, capital flows, protocols of exchange, choreographies of bodies, temporal programming and indeed language itself are all crucial modalities addressed through spatial practices and our communication of spatial experience. If the poets’ work is the invention, refunctioning and restructuring of language, the inappropriately critical spatial practitioner is nothing less than a poet of spatiality, a labourer of speculative spatio-temporal poiesis, affirming difference and alterity in the face of the given.