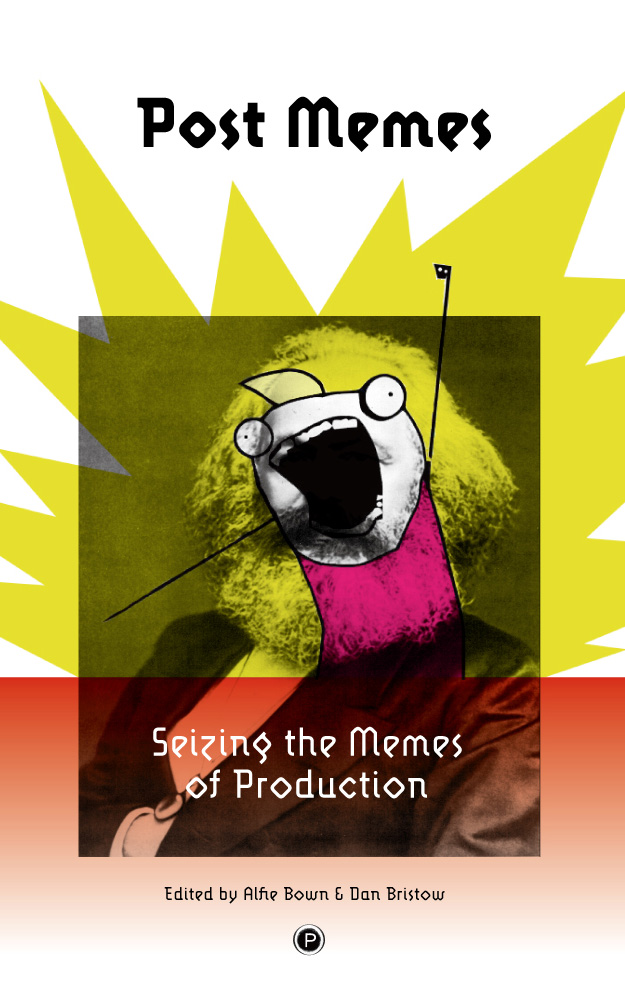 The punny call to ‘seize the memes of production’ (a meme in its own right) would entail a gargantuan, though not undeliberated task, of both designing and implementing a model of collective ownership for the platforms that enable users to circulate memes in the first place. In a production mode composed of infrastructure, hardware, software and crucially, a critical mass of users, how far down the chain of production does such a call gesture at? If this call is to be taken seriously, and is not merely a play of fortuitously matched words, what do we actually mean by it? The backbone enabling our base connectivity? The ownership of our extracted data on an individual and/or aggregate level? The socialization of gains made through collective, unpaid labour? Platforms reorganized along the principle of a globally-scaled public utility? The open-sourcing of platform architecture and algorithms that guide what we see and what others see from us? All of the above? As a point of entry, these questions point to the depth of scales one is compelled to consider within this comparative play on the historical expression.

The second point, concerns the relevance of this historical referent within our present. Do emancipatory labour models from industrial capitalist historical contexts hold the same degree of effectivity under current conditions of production, value creation and surplus value extraction? When ‘seizing the means of production’ became a communist meme in industrial capitalism, it specifically targeted the socialization of surplus value of production as an emancipatory claim tied to the productive labour of workers (where the enclosure of ‘the social’ presumably assumed the bounds of a nation-state organizational form). Deploying this phrase in the context of globally networked platform economies requires that we would first map the relation between worker and user; secondly, that we identify how surplus value is accrued; and thirdly, contend with a global scale of sociality from which this surplus value is derived, and for whom it would be destined. Additionally, and only adjacently addressed in historical Marxian analyses, are the negative externalities these production modes are tethered to at a planetary-scale, which can no longer be a mere aside in conceptualizing durable transformation. Without adapting the telos of the demands to our present conditions, these referents operate less to catalyze progressive change, and serve to entrap our futural imaginaries by ossifying nostalgic ideals with little use-value or malleability. Can we uphold the general ambitions contained within the historical expression, while doing the analytical work in grasping the different affordances, modes of value-creation, technicity and possible points of leverage at play in our moment for a transformative pragmatics to emerge? When the playing field has changed, strategies for reengineering the rules demand adaption.