In #ACCELERATE: The Accelerationist Reader, eds. R. Mackay and A. Avanessian, Berlin/London: Urbanomic and Merve Verlag, 2014 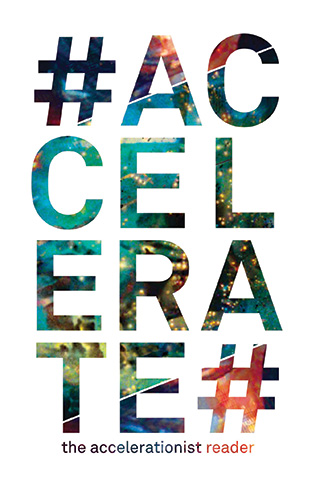 Commitment to an eccentric future untethered from the existent axial pull of socio-economic or climactic apocalypse cannot be nostalgic, nor based solely on the dread of impending doom. To depart, as the manifesto does, from a fearful threat of cataclysm (albeit by no means unfounded) is to deploy the same techniques as religious scripture—and, as Ray Brassier has noted, fear is precisely what must be overcome first in any emancipatory project. The admirable futural will that drives the manifesto seems peculiarly tentative towards the future. It feels locked in the past on several points, looking backwards over its shoulder to recount exemplary precedents (largely failed Cybernetic ones), self-assured in its nostalgic distance and unwilling to take that speculative leap towards the unknown. While correctly identifying a certain paralysis that comes over the left when faced with the forecasting of alternatives, the manifesto seems bound to its own lamenting diagnosis, unable to prognosticate beyond vague assertions. This is not to discount the necessary labour and prowess typical of the left in generating exacting critique (duly recognized in the manifesto), yet it is to highlight the continued lack or void in fertilizing any sense of the becoming possible of the impossible, the articulation of the outside, and the production of desire itself. Commitment to an eccentric future entails a thinking/doing matrix beyond pure diagnostics or historical exemplification; the latter are necessary in eliciting an attitude of negation (what we don’t want) or precedent, but wither in the face of producing what we do want (especially on a macro, extra-local level). Remaining in the temporality of what is (or what was) clouds the very futurity that could or ought to be uncancelled—the future is prognostic, and its tense must evolve towards the anticipatory. As an indeterminate entity, the future (today foreclosed by casino finance) entails a risk, as it surges from analysis (epistemology) to what could be (speculation). To speculate is to articulate and enable the contingencies of the given, armed only with the certainty that what is, is always incomplete; to speculate is to play with the demonstration of this innately porous, nontotalisable set of givens. Extricating ‘speculation’ from its current bedfellow of finance entails a fidelity to an incalculable future divorced from the reductive apparatus of the wager, wherein all possibilities are conflated with probabilities. Probability is but a mode of liberal openness responding to the set of known affordances within a given condition (a mode of being over-determined by what is known), foreclosing on the potential of epistemic fallibility. To speculate, on the other hand, is to mobilize the capacity of epistemic fallibility; to deploy this fallibility as an engine in the never-ending effort for socio-politico-technological (not to mention ethical) redefinition, implying a thinking of time adjacent to the present, since to remain in the present is to refuse the inexistent. Speculation is an ethos of non-presentness, in which the bounding of a determinate, definitive project is continually undermined by an experimental responsiveness to epistemic, ontological and systemic variation. Such foundational work requires a commitment to the force of imagination of what could be or ought to be, prior to pragmatism and logistics, for it is the affective ground upon which the inexistent may be noetically instantiated and gain catalytic impetus. Laying the bedrock for a political condition of speculation is necessary in order to overcome the alternativeless future that Accelerationism rightly militates against; yet these possible futures can only attain traction when the distribution of affect is embraced in equal partnership with calls for operational, technological and epistemic restructuration—there cannot be one without the other.