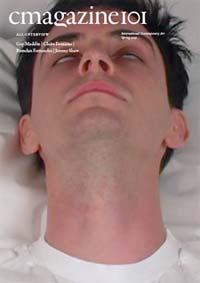 “Politics revolves around what is seen and what can be said about it, around who has the ability to see and the talent to speak… ” – Jacques Rancière

A large, low-raised, spot-lit pedestal in a dim space sits empty – while a subtly massive shadow seems to emanate from nothing on the back wall. Approaching the pedestal, guards politely tell me not to get too close. While a student sketches a spectacular and bulbous form, her pastels and charcoal sprawled around her, another viewer crouches as if to observe an underbelly detail of the piece. Other visitors seem as confused as me, wandering up to the wall label, only to read a rather extensive list of materials, like synthetic hair, polystyrene and the like. Camaraderie between spectators ensues, as we take to watching each other for silent affirmation that – indeed ‘nothing’ is there, it is pure theatricality! Claude Wampler’s recent work prepared for the 3rd Yokohama Triennale (2008) entitled: “untitled sculpture (LARGE-SCALE FLEXIBLE&SEXY SELF-CANNIBALIZING NAKED VAMPIRE)” seems to have gone missing.

The performative nature of the work requires an experiential encounter with the social forces of bewilderment at play in the staging of ‘nothing’. This performative return to the primary, experiential condition of art seems to be ‘du jour’ – and indeed was the driving concept within the Yokohama Triennale framework. The performative re-turn of several important artworks of late seems to undermine the reproducibility factor associated with documentation-based practices, where one need only purchase a catalogue rather than actually experiencing an exhibition. Nietzsche’s Dionysian forces may well be at play in this experiential re-turn of the artwork, yet modes of reproducibility remain a quintessential factor to the survival of any artwork within the system of art – regardless if it can be mass re-produced in publication form, or if it’s modes take on subtler forms of quasi-reproducibility, such as discourse and conversation. The latter mode of reproducibility has a long-standing tradition within the system of art (much before mechanical reproduction became a possibility) and although the modes of such re-production are indeed not identical (as in the mechanical or digital realm), it is precisely within this partial re-producibility that the artwork can proliferate, whilst enhancing its standing as mythic, narrative force.

As one is duped by the empty pedestal of Claude Wampler, casting a figurative, slightly animated shadow, the overtly moral tale of Hans Christian Anderson’s famous “The Emperors New Suit” naturally comes to mind – as if she is the ‘scoundrel tailor’ and we, the (first) confused, then enlightened audience – there is indeed nothing, it is pure theatricality! What is interesting is not the ‘enfant-terrible’ reaction to the piece as her thumbing her nose at the art-world’s gawking spectators by presenting ‘nothing’ – but rather to look at how this staging of ‘nothingness’ reveals social processes of ‘value making’ within the sphere of cultural production by employing mythic communication as it’s fundamental (im)material of construction.

Wampler’s work makes palpable the production of myth-making and rumour as invaluable agents of artistic currency – self-consciously referential to the system of art within which it is situated and within which, it will thrive or fail. The work is the speculative myth silently communicated amongst visitors and those conversational fragments of bewilderment that ‘will to’ spread outside the museum. The installation is a pretext from which social processes of reception and derivative communication are staged and reflected back to us – the ultimate performers within and beyond the works material incarnation. By creating a work that makes public the amorphous social scaffolding upholding a system of cultural production – and ‘value-making’ therein, Wampler draws critical attention to the communicatively induced forces of selection at play within the system of art.

Wampler’s theatrical staging of the communicative operations residual (albeit integral) to the artwork’s ‘systemic success’ are wholly indebted to Niklas Luhmann’s perspective on the function of communication within a given social system. In Luhmann’s view communication is not a mere transmission device by actors but is the very process of selection within a given system, referencing its’ horizons, and the things which it excludes. Wampler makes ‘selective communication’ the substance of her piece – staging for us, an encounter with the processes of by-production that surpass (in systemic importance) the formal components of the work. The derivative re-production of the work (through magazines, catalogues, conversations, etc) is the works material, drawing attention to itself not through ‘content’ per se, but through the ‘content-lessness’ of its rumour-generating capacity.

It is interesting to note Walter Benjamin’s metaphor of the shadow in reference to the perception of aura: “If, while resting on a summer afternoon, you follow with your eyes a mountain range on the horizon or a branch which casts a shadow over you, you experience the aura of those mountains, of that branch.”(Benjamin, Walter. The Work of Art in the Age of Mechanical Reproduction). Benjamin employed this metaphor to illustrate the downfall of aura, based on the desire of the masses to bring things spatially ‘closer’ through reproductive technologies – as opposed to the ‘natural’ (and necessary) distance of the shadow. ‘Aura’ is that thing emanated – wholly dependent on a source from which such an emanation is possible. Etymologically, aura refers to a gentle breeze – and it is in no ironic twist that the ‘shadow’ in Wampler’s piece displays subtly moving ‘hair’ on what appears to reference a figurative sculpture with it’s head down. What happens to the Benjamin’s allegory of the shadow when there is no visible ‘source’ from which to contextualize the shadow cast – the production of effect without perceptible cause?

Wampler’s piece (I later learned that some audience members were actors paid to ‘see’ the work, while the guards were in on the game as well) updates the shadow metaphor by moving towards the direct production of aura – a self-contained shadow effect, in and of itself. It is a gesture of intentional and unabashed ‘buzz’ and rumour seeking, without the spectacle often associated publicity generating art works, but rather through the gentle breeze of confusion that blows through the hair of the projected shadow and a few insiders who perform the works imaginary form. Wampler’s work projects a critical shadow ‘without source’ to draw attention to the selling of stand-alone aura – in itself a process of re-aurafication, without material contingencies. We may not actually feel the fine fabric of the Emperors suit, or see an artwork, but we certainly can imagine how incredible it is…or so I’ve heard.