Testify! The Consequences of Architecture 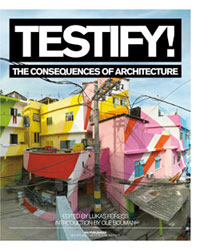 1. Please describe how you learned about the project and became involved with it.

Markus Miessen organized the Winter School Middle East and we have been friends/discussion partners for a few years now, so I presume the invitation to prepare a seminar series came as a result of our mutual interests and ongoing conversations.

2. What were your expectations for the project before it began?

Since this was the first instance for the Winter School to take place, I went in rather naively and openly, with the idea that on-site some degree of flexibility and adaptability to the situation would be necessary. This was also my first trip to the gulf region, so I went in with the expectation to learn a great deal from our encounters – organized and otherwise. That said, my expectations were basically to give and receive in equal doses, teaching of course, yet learning from the students themselves as well as the various guests that were invited within the scope of the programme.

3. Exactly what was your experience with the project? Be as detailed as possible – perhaps explain a scenario or outline your impressions.

I was quite enthusiastic about the interactions we had onsite. We had a mixture of students from the region as well as several European students – all from a variety of backgrounds. The variety of backgrounds makes things slightly more ambiguous when preparing a lecture series that should be relevant to many disciplinary approaches – not using highly specific vernacular or historical precedents to frame the discussion too much in the direction of purely art, theory, or architecture. Since the success of the project was wholly contingent on the engagement of the students in relation to the lectures, I sensed a strong degree of reciprocity – and I would qualify my experience positively precisely from this reciprocity of give and take. I was doing theoretically oriented seminars, trying to get students (who were challenged with studio based projects), to open some perspectives as to the consequences and methodological approaches they might take when examining a particular situation – the seminars were dense and a lot to take in, yet when they come to you at the end of a lecture and ask for references to follow up on, that is generally a good sign. My impressions were that several of the students hadn’t yet been confronted with some of the concepts that were outlined, mainly pertaining to politics and aesthetics, but there was a hunger for more, and that sense of curiosity was inspiring.

From the administration side, things were kept rather loose, which at some points seemed like it could have used a bit more structure, but on the other hand it feels more like ‘participating’ when you know you are welcome to affect the structure of the project – so ultimately this looseness was a gesture of openness to modify and co-create the infrastructure. That said, I never felt that I was merely participating as a pre-defined cog in the framework, but that I was able to assist in defining what that position would be and how I would move in the system, so to speak.

4. Do you have regular contact with the other participants? Have you been able to give feedback to them regarding how you thought the process went?

Since we are geographically dispersed and the school project had a start and ending date, I don’t have regular contact with the other participants in a rigourous way – we keep in touch informally. That said, at the end of session we sat down at a grill-party with the students to discuss with them their impressions alongside our own. Several of the students iterated a request for slightly more structure (never too much!), so that seemed to be a general feeling – that the time for studio development was perhaps, in some cases, too open, and not enough urgency to get things done. From the side of the invited teachers alongside the local organizers, we shall soon again be in touch to reflect and elaborate on our experience through a series of texts and conversations that will be disseminated in some form. The format of the multilogue/conversation has been an excellent way to cull our reflections and particular biases concerning the study undertaken in the project – I can say for myself, reading the responses/reactions from my colleagues in our conversation has made me see my own blind spots and presuppositions more clearly – so the dialogue itself has been a useful critical tool, even if only selfishly so.

5. What have been the results of the process? How did things change from beginning to end?

As I mentioned above, we are collaboratively working on some form of disseminating the project and the field of study of ‘Diwaniyah’, which was undertaken in Kuwait, so I suppose this is the ‘result’ if you will. More importantly, for me at least, is hoping that the ideas introduced to the students will penetrate in some way into their production ethos. Theory can be taught to only a surface degree I think, in the end, one has to take it upon oneself to really get into it, so my hope is that my result was to have sparked the students with a sense of urgency and inquisitiveness in philosophy/theory, that they will take up on their own – that they experience a whole hearted relevance for incorporating this type of thinking within their practice as designers, artists or architects.

6. What is the future of the project? What are your hopes for it? Have you stayed involved? Does it aim to be self-sustaining?

As I understand it, the Winter School is designed to run for three years, at this point in time, but I would presume that with each iteration having its own particular thematic, new actors will be invited to Kuwait to create other studios and courses, so my feeling is that for us who were invited it’s more of a one-time experience. I think that’s an important part of the project and keeps it relevant in the regional context – so that students could participate several times and have completely new perspectives. My hopes for the Winter School are definitely to remain as involved with the project as makes sense, keeping in mind that the nature of the project is to incite a diversity of vantage points (so it’s not a closed circuit of invitées). In terms of self-sustainability, I don’t think that is the ultimate goal of the Winter School, if by self-sustainability, you mean some sort of long-term, institutional endeavour. The possible strength of the Winter School is its temporary configuration so to speak, that it has no deep-seeded roots – it can be stopped, moved or mutated into different forms, and I think that flexibility of ambition and structure allows it to respond to an array of regions, issues and actors. If the Winter School seeks to address certain geographic situations of architectural/urban significance, it requires a certain lability – physically, conceptually, programmatically and in terms of its interlocutors.