Ten Theses on Publicity* and Art 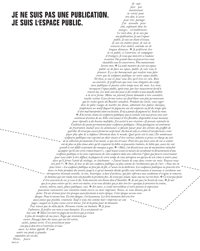 * In his book Secret Publicity, Sven Lütticken recovers the original meaning of the word ‘Publicity’, which has been largely appropriated by the advertising world. Publicity signifies what now goes by the awkward term ‘Publicness’.

1
It shall be held as axiomatic that publicity can only have political significance if it is understood, conceptualized, and intervened upon in its symbiotic relationship to the quasi-public (institutional, educational, commercial) and private spheres. Publicity is not simply ‘out there’, nor is it limited to contexts of urbanity. The apprehension of publicity occurs on the cusp of these symbioses and multiple geographies, in the linkages these symbioses describe and delineate.

2
Good art plays with the tensions between art and life without a specific teleology, nor moral lesson. Art does not write policy, nor does it properly educate, it is necessarily supernumerary.

3
Publicity and Art is not de facto political. On the contrary, most forms of art and publicity are apolitical. For art and publicity to generate political affect, other horizons of possibility must be made palpable in regards to the accounting of people (plants and animals), function(s) of places and the operative roles designated by a regime of common sensibility. Good art augments common sense by way of the uncommon, by way of unworking the topology of the normal.

4
Publicity is always multiple. There are manifold worlds within the singular notion of publicity. (See also thesis 3 on horizons of the possible)

5
Publicity happens behind our backs, in the undecideable plurality of the socio-economic/cultural world into which we are thrust. Likewise, the affect of one’s art is always behind one’s back carried through the world as a perceptual memory in the spectator – in the parlance of Kant, the world citizen. The impartialness with which the spectator spectates is a form of indifferent, nonparticipatory agency, an agency inscribed by the capacity to perceive.

6
Publicity and Art know no scale. From a grandiose projection on a building façade to a passing gesture on an escalator**, art and publicity is not contingent on mass visibility, nor does it refute such forms of popular attention. Art and publicity proceed by moments, struggling with, around and against the economization of attention, no matter how subtle, fleeting or extravagant these moments of attentiveness may be.

7
The normal condition of contemporary publicity can be characterized by an ethos of circulation – both in terms of fiscal exchange and flows of people in efficient movement from A to B and back again. Circulation is to drive, what fulfillment is to desire. Whereas desire can be quenched by obtaining that which it lacks, drive circulates around lack, satisfying itself by always missing its mark. It is the force of drive that underlies the conventions of critique – that mode of criticality seeking to unveil truths behind the ‘lies’ of shiny appearances, perpetually revealing the ‘law’ of the capitalist beast behind every brilliant image. The endless diagnosis of the same condition does not attain its goal of mutation through the sharing of the knowledge of ‘truth’, it defers transformation and passionately reifies the gravitational strength of that around which it circulates (the ‘law’ of commodity). Recognizing the futile, self-satisfaction caught up in the drive of endless diagnosis, art and publicity invent other modes of criticality that no longer unveil the ‘law’ of the beast, but demonstrate the contingency of our perception of this ‘law’, rooted as it were in real imaginaries. The materiality of publicity, like that of imagination, is wholly plastic – something fabricated by humans subject to deformation and reformation. Endless diagnosis of the same, on the other hand, petrifies imagination.

8
The daily language of publicity is largely choreo-graphic; a silent language composed of movements and trajectories in space and time. The choreography of the quotidian is not universal in its modes of articulation, yet it is the principle language of publicity. Choreo-graphy is a writing of the spatio-temporal matrix. Choreo-graphy is also a reading of this very space and time, a nontextual apprehension, without a proper score, of all that which goes without saying. The enunciation of spatio-temporality, especially in the multiple, is a sequence of fragmentary decisions. To trace a line is a moment of decision, a cutting up in/of space and time. Choreo-graphy is a fertile language through which the ethos of circulation can be mediated. (See also thesis 7 on critique and the petrification of imagination)

9
Publicity and Art should not underestimate the power of a good joke. Even our unsmiling godfather of psychoanalysis Freud himself, noted the ways in which suppressed thoughts and sentiments can be given a space of jovial release through the joke. Let us not forget the significance of the jester, who held no official position within the court (like the artist), and who negotiated a risky threshold between frivolous humour and disdainful mockery. A good joke adjudicates between these polarities in a gesture of critical hilarity, although it is true that not everyone can tell a good joke.

10
The above statements are easier said than done, and are to be imagined as etched in pencil, despite their printed form, and thus, declarative nature. Publicity is forever characterized and indebted to the overscore, that device of literary revision, whilst leaving a trace of that which it seeks to cancel, edit or amend.
** In admiration of Jiří Kovanda’s 1977 public action on an escalator in central Prague, where he turned around to gaze fixedly at the person behind him.