Eccentric Space: Democracy At All Cost and The Indisciplinary Participant

In Waking Up From The Nightmare of Participation. Eds: N. V. Kolowratnik & M. Miessen. Utrecht: Expodium, 2011. 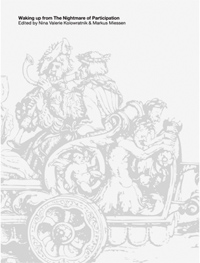 Harmonistan is Miessen’s tongue-in-cheek name for this regime of consensus, and although eliciting a chuckle upon reading, is anything but harmonious. What is at work in the regime of consensus is the totalization of various peoples, places and functions into a unity of a single space indistinguishable with the population and its distribution, to the exclusion of any remainder. Consensus has nothing to do with a common agreement of policies of an expert government, yet permeates and petrifies the normative symbolic order or, to the violent segregation of that which is supernumerary, to that which is otherwise possible. The stultifying presupposition of consensus is that the people, the demos are already given (consensus is whole), that their communities are established, and their modes of speech are concordant with their roles, functions and disputes. Within the normative symbolic order, what the regime of consensus sets up is an impotently myopic vision: that we have attained resolution in regards to the fight over political structures, yet the condition of this resolution is that we only can have what we have; in the words of Alain Badiou, consensus is the fusing of what is with what can be (Badiou: Infinite Thought, 2005). To downplay the inherent violence of this totalizing consensus is a dangerous gesture, both in theory and in practice, for to do so prohibits the political subjectification of that which is excluded, of the part that has no part in the normative structuring. The regime of consensus cannot even conceive of a representable barrier of exclusion, nor of the processes of division in its totalizing view, as a result, the delineation of a supernumerary is completely absent from common sensibility, from the sensus communis (Rancière: Disagreement, 1999).

To conflate consensus with ‘all-inclusive democracy’ reifies this violently negligent presupposition of totality, of wholeness, of the congruency between the population (the accountable, the surveyable) and the demos. Now in fairness, the general tone of The Nightmare of Participation seeks necessary and admirable strategies to combat such a regime of consensus, through the intrusion of uninvited intervention, yet the stakes of rhetoric involved in such a project, cannot be unquestioned. Words are not innocuous. The suggested avoidance of democracy alluded to through the book, in order to instigate other modes of appearance (of architecture, art, people, interactions, policy-making, pedagogy and so forth), is a commonly held opinion from both the right and left. The beaten up notion of democracy as that associated with mediocrity, watered down solutions, majority rule, rampant populism coupled with mass individualism, passivity, and the reproduction of the status quo; is explained as a form of governance riddled with bureaucratic procedures, unable to propel substantial change or novelty. What we are reduced to on both sides of critiques on democracy is an imbrication of democracy with an order of governance, a form of governance that can be instituted (even viciously imposed), and a form of governance synonymous with certain states known simply as ‘democracies’. In these instances democracy becomes identical to systems of law, expert guidance, protocols of management and even designates certain geographical regions, to the subordination of democracy as a universal potential power of the people. Daniel Bensaïd captured these doubts projected at democracy quite acutely when quoting Tocqueville from 1853: “I accept the intellectual rationale for democratic institutions, but I am instinctively an aristocrat, in the sense that I contemn and fear the crowd. I dearly love liberty and respect for rights, but not democracy” (Bensaïd: Permanent Scandal, 2011).

Tocqueville’s statement is emblematic of an ongoing hatred or deep mistrust of democracy (from Plato to Churchill and beyond) that has been duly traced by Rancière, who resuscitates this bloodied term from the shackles of ordered governance. Fear of the crowd is nothing new, for the crowd is inherently unbounded, and it is here where we see Plato’s critique of democracy: that the limitless wills and demands of the people (the excess drives of the demos) must be contained to conform to the wills of an expert government, of those who know better, of those who are privy to knowledge. By equating democracy with a system of expertly delineated limits, what is at stake is a fundamental shift from the very unsettling force implied in the ‘-cracy’ of democracy, to an ‘-archy’ (of oligarchy, monarchy) that is some form of legitimated, grounded power. This is not merely a linguistic issue, but the very limiting of the limitless, which strips democracy of its political thrust and is conceived as a structure to contain the implicit excess of wills and drives of the people. The hatred of democracy is thusly that a ‘good’ democracy is one that can successfully contain, stabilize, subdue and repress the inherently unstable and excessively demanding demos. The hatred of democracy is a doubly directed one; on the one hand it is directed at the increased instantiation of limits by government (totalitarianism), and on the other hand, the hatred is directed at popular participation in public affairs itself, which is portrayed as irresponsible, individualistic and consumer driven (mediocracy, media driven) (Rancière: Democracies Against Democracy, 2001).

The call to avoid an ‘all-inclusive democracy’ in The Nightmare of Participation reveals an accord with the hatred of democracy itself. And here in lies a central point that demands arrestation before proceeding on this excurses. What needs to be avoided at all cost is not democracy, but its very equation as a totalising instrument of cohabitational, structural limitation and popular mediocracy. For it is in the hatred of this particular apprehension of democracy where politics disappears, being usurped into the category of a given ordering, the disappearance of which is the specific critical axis around which Miessen’s ‘agonistic’ stance on participatory intervention revolves. If participation is called upon to unsettle given modes and protocols of operation, instigating other conditions of possibility, this commendable portrayal of participation can go by no other name than the enactment of democracy, assuming the vital force of the ‘-cracy’ (kratos) in all of its augmentative capacity in agonistic relation to the settlement of the ‘-archy’ (arkhe), or that which rules and distributes a given order.

Reed, Patricia. Eccentric Space: Democracy At All Cost and the Indisciplinary Participant in Waking Up From The Nightmare of Participation. Eds: N. V. Kolowratnik & M. Miessen. Utrecht: Expodium, 2011. 10-24.