The Valuation of Necessity 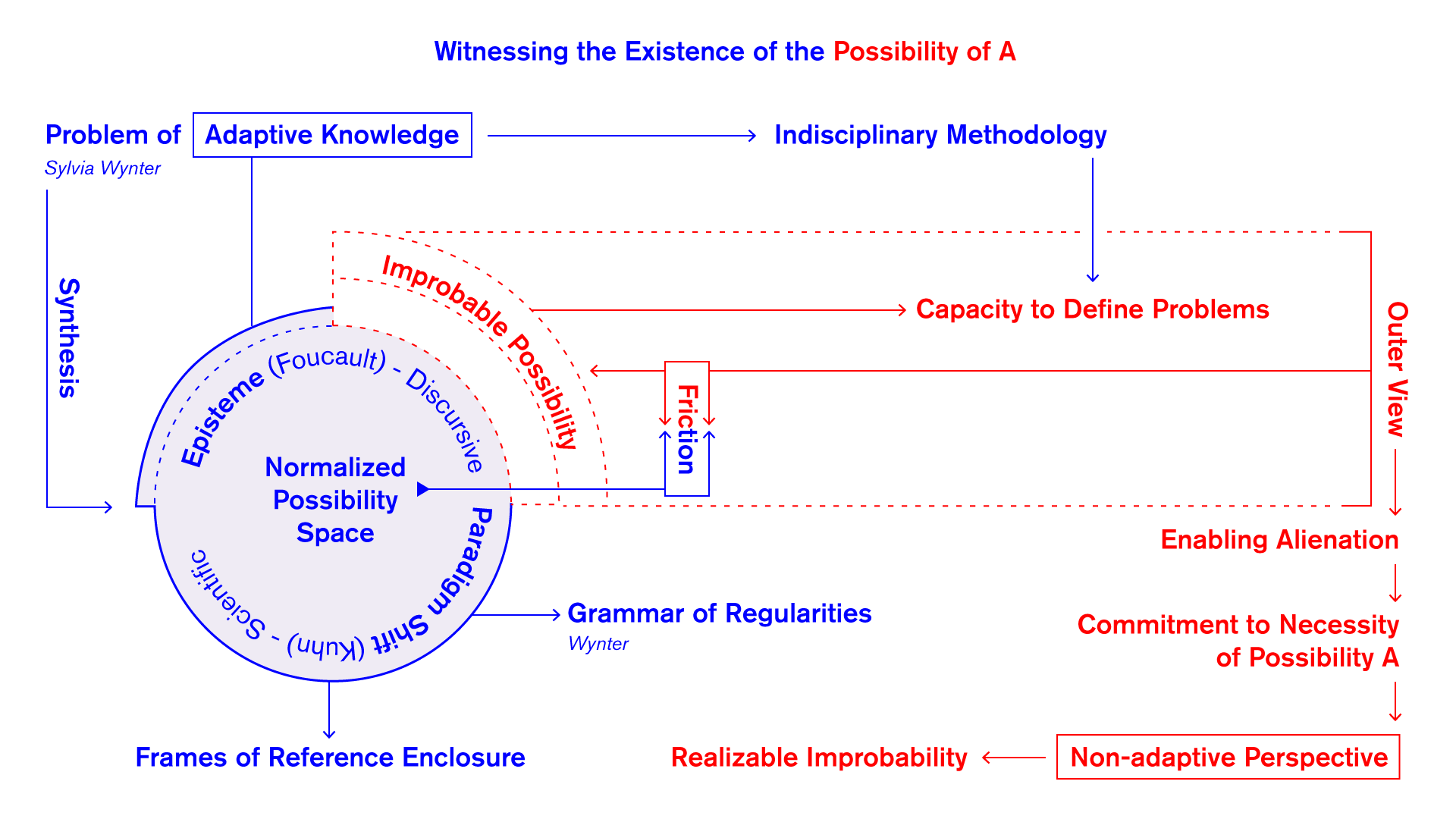 Considering the premise that a technical object is an “artifact used to make other artifacts,” we can infer that a technical object is not just the concrete thing unto itself, but also includes the not-yet concretized possibility for its repurposing, or retooling into something else. In this way, technical objects must, by definition, contain the possibility of other use and signification that may not be immediately apparent within given interactive frameworks or milieus. That said, falling into a delirium of “possibility idealism” because technical objects always contain within them a degree of indeterminacy, would be to ignore concrete and operational constraints (material or protocological determinations) also endemic to them that set limits on what is realizably possible. As Ramon Amaro noted, “we can be contingent, but only within the limits of the protocols that we interact with.”[1] Otherwise said, the possible retooling of technical objects is not infinitely open. Anil Bawa-Cavia has elsewhere summarized such a premise in logical terms (known as the Barcan formula): “the possibility of the existence of A implies the existence of the possibility of A.”[2] Here, the possibility of the existence A necessarily requires the existence of the possibility of A. However, on a practical note, it must be observed that “the existence of the possibility A” may be undetectable or difficult to recognize, because of the normative, epistemic and cognitive conditions within which humans interact with technology in habit-forming ways. For Wendy Hui Kyong Chun, habits with regards to communications technology (specifically “new” media), are described as behaviours and “things that remain by disappearing from consciousness”.[3] While Chun explicitly has ambitions to work critically with habit-formation as a socially transformative process against the “hype around disruption”[4] (a process that has resonance with Simondon’s use of “metastability” as a way to describe a temporary, processual state of stability-making),[5] her principle can also be extrapolated in the following way: that which has disappeared from consciousness impedes upon the intelligibility and/or the perceptibility of the existence of possibility otherwise. We can then say that the prerequisite conditions for the transformability of any technical object are dependent on the heuristic capacity for practical and/or conceptual dehabituation in order to construct perspectives amenable to making immanent possibilities intelligible.

The problem of witnessing the existence of the possibility of A traces back to Wynter’s general engagement with the question of historical-discursive and scientific paradigm shifts; the former influenced by Michel Foucault’s concept of the “episteme,”[6] and the latter via Thomas Kuhn’s theory of scientific revolution.[7] While these theories are distinct, the broad similarities between them lie in the way both thinkers grapple with the reinforcement of discursive or scientific normativity, and the difficulties posed to thinking and doing otherwise because of these enclosures of habituation (to recall from Wynter’s analysis, behaviours and epistemologies are incentivized to adapt to—or derive habits from—configurations modeled on a referent human genre-concept). A paradigm can be understood as the cultivation and discursive conditioning of a historic milieu that enables certain general trajectories, whilst disabling others. Furthermore, discoveries and inventions within that particular configuration can be bracketed as belonging to a certain period. As Kuhn wrote: “One of the things a scientific community acquires with a paradigm is a criterion for choosing problems [my emphasis] that, while the paradigm is taken for granted, can be assumed to have solutions. To a great extent these are the only problems that the community will admit as scientific or encourage members to undertake.”[8] Additionally, Derrick White adds “practitioners of scientific paradigms, avoid, evade, and occasionally adjust to maintain normative status in the face of anomalies and crises,” not because a paradigm has “superior explanatory power” but simply in order to “save” the framework.[9] Despite the normative recursion enforcing the maintenance of a paradigm, they do, of course, change when there is enough insistence that anomalies and crises are better accounted for within another framework, a transformation that also, notably, unfolds into new criterion for defining problems. Wynter’s body of thought is effectively a synthesis of the episteme and scientific paradigm change as applied to cultural systems through an “indisciplinary”[10] methodology, and as we have seen from Simondon, these cultural systems are also technical systems.

The Improbable and Non-Adaptive Perspectives

Parsed through Wynter’s synthetic analysis, the problem of witnessing the existence of the possibility of A within a given paradigm that obfuscates the perceptibility of possibility A, is a problem tied to the perception of “the grammar of regularities” that institute a boundary condition enclosing normalized possibility,[11] in contradistinction to possibility as such. “Normalized possibility” can be more concretely translated as “probability,” specifically the hegemony of probability calculations that govern much of technosocial reality today, for which probability operates as “the entropic tendency towards the elimination of the diverse,” in the words of Bernard Stiegler.[12] For Wynter, the question of witnessing emerges from the perspectival category of the liminal, insofar as a “structural contradiction” can be understood or experienced between the representational order that prescribes parameters of behavioural coexistence, and lived or empirical reality that is unaccounted for within that representational grammar. Mapped onto Stiegler, the “liminal” corresponds to the category of the “improbable” insofar as the improbable resists calculation within a given framework, which, furthermore, deals a blow to the concept of “information” as a mere result of calculation.[13] In Wynter’s words, “[t]he liminal frame of reference, therefore, unlike the normative, can provide…the ‘outer view,’ from which perspective the grammars of regularities of boundary and structure-maintaining discourses are perceivable…”.[14] In other words, the enablement of liminal witnessing is tied to the capacity of making intelligible the existence of a boundary condition that constrains realizable possibility, opening a space of intervention through the discursive enclosures of self-reference. This “outer view” is not a view from nowhere, but a comparative perspective that grapples with a double position: one of structural implication (discursively inside and therefore within given configurations of probability), while making “claims that are irreducible to current social configurations”[15] (discursively in excess, introducing improbable systemic information that is incalculable within existing configurations of probability). It is through this immanent conflict with a discursive, or operational border enclosing a system of self-reference (an inner view), that new concepts emerge through which to perceive frameworks beyond said border (an outer view), and where in this frictional, comparative procedure the discursive camouflage obfuscating the “existence of the possibility of A” is undressed, yielding a form of “enabling alienation”[16] from given and probable-given configurations. This procedure is not without risk since committing to the possibility of A entails a demonstration that what is currently risked, namely “self-identification within a given constitution,” is not essential, is not necessary, while risk taking for the possibility of A, becomes or emerges as necessary.[17] This particular depiction of risk, as Negarestani notes, is not the disavowal of risks “that can and should be mitigated by increasing the sophistication of our theoretical and practical knowledge,” (like the risk mitigation of wearing masks in public during an aerosol-transmitting viral outbreak), rather this is “risk as the figure of time itself, the figure of its formlessness and contingency,” where all given, historical “totalities disappear”.[18] The labour of homo narrans is conjoined with such a figuration of risk as it struggles for historical-discursive incompletion, or systemic detotalization—that is, of demonstrating the self-referential closure of a system to be unnecessary, unjust, or untrue (especially its adaptive truths)—in an onerous process without guarantee. Epistemic or paradigm shifts occur not only as the critical recognition of the existence of possibility A, but as the risky realization of possibility A, driven by the historically constituting figure of homo narrans; an impossible task for a purely bio-centric genre of being human with a predefined, fixed “nature”, essence or telos. The term for such transformative shifts in referential frameworks is an “otherworld” (as a generic, non-qualitative variable), and it’s nontrivial coming into existence is dependent on the risky process of constructing an “outer view”, an improbable vantage-point that is never given in advance and is isomorphic with what is, initially, a non-adaptive perspective.

[1] Ramon Amaro, “Blockchain and the General Problem of Protological Control,” lecture at Identity Trouble on the Blockchain, 23 November 2017. https://soundcloud.com/furtherfield/ramon-amaro-identity-trouble-on-the-blockchain-231117
[2] Anil Bawa-Cavia and Patricia Reed, “Site as Procedure as Interaction,” in Construction Site for Possible Worlds, eds. A. Beech and R. Mackay (Falmouth: Urbanomic, 2020), 82-99.
[3] Wendy Hui Kyong Chun, Updating to Remain the Same: Habitual New Media (Cambridge: MIT Press, 2016), x.
[4] Ibid.
[5] Ramon Amaro and Murad Khan, “Towards Black Individuation and a Calculus of Variations,” in e-flux Journal, no.109, 2020. https://www.e-flux.com/journal/109/330246/towards-black-individuation-and-a-calculus-of-variations/
[6] The “episteme” was coined by Michel Foucault in The Order of Things: An Archaeology of Human Sciences, (London: Routledge, 2005). David Scott succinctly defines the “episteme” as the field conditions that enable and shape knowledge in a specific way; as that which “determine[s] the rules of formation of concepts, theories, objects of study.” (From David Scott, Preface to “The Re-Enchantment of Humanism,” (Interview with Sylvia Wynter), in Small Axe 8, 2000, 119–207)
[7] Thomas S. Kuhn, The Structure of Scientific Revolutions, (Chicago: University of Chicago Press, 1962, 1970).
[8] Thomas S. Kuhn qtd. in Derrick White, “Black Metamorphosis: A Prelude to Sylvia Wynter’s Theory of the Human,” in C.L.R. James Journal 16, 2010, 127-148.
[9] Derrick White, “Black Metamorphosis: A Prelude to Sylvia Wynter’s Theory of the Human,” in C.L.R. James Journal 16, 2010, 127-148.
[10] “Indisciplinarity” was defined by Jacques Rancière as not merely going between or across disciplines, but “breaking them” as a way to “escape the division” between them. Jacques Rancière, “Jacques Rancière and Indisciplinarity,” interview with M. A. Baronian and M. Rosello, trans. G. Elliot, in Art & Research: A Journal of Ideas, Contexts and Methods, 2, no. 1, 2008. http://www.artandresearch.org.uk/v2n1/jrinterview.html
[11] Sylvia Wynter, “A Ceremony Must Be Found: After Humanism”.
[12] Bernard Stiegler, “Noodiversity, Technodiversity: Elements of a New Economic Foundation Based on a New Foundation for Theoretical Computer Science,” in Angelaki 25, no. 4, 2020, 67-80.
[13] Ibid.
[14] Ibid.
[15] James Trafford, “Reason and power: Difference, structural implication, and political transformation,” in Contemporary Political Theory, 2019, 227–247.
[16] Reza Negarestani, Intelligence and Spirit, 180.
[17] Ibid., 488.
[18] Ibid., 487.